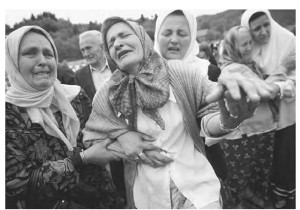 This Monday, survivors of the 1995 Srebrenica massacre opened a civil suit against the Dutch government. They argue that the Dutch peacekeepers in Srebrenica did not protect the victims of Europe’s worst massacre since the second world war.

“They did not prevent the murder of thousands of civilians,” the group’s lawyer, Marco Gerritsen, told the district court in The Hague, where the case is being heard.

The legal action was first brought in 2007 by victims’ group the Mothers of Srebrenica, in connection with the massacre during Bosnia’s three-year war in the early 1990s.

The Mothers of Srebrenica, representing some 6,000 widows and victims’ relatives, have been seeking justice for several years for the massacre, which the UN’s international court of justice has ruled was genocide. END_OF_DOCUMENT_TOKEN_TO_BE_REPLACED