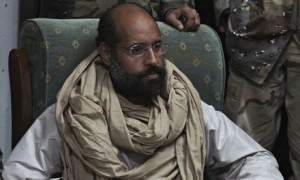 The trial of Saif al-Islam and Saadi Gaddafi, sons of deposed Libyan dictator Muammar Gaddafi, begins today in Tripoli. The brothers are accused of coordinating a campaign to murder, torture, and bombard civilians during the Libyan civil war in 2011. They are also accused of plundering state resources in order to fund their extravagant lifestyles.

They are being tried alongside Abdullah al-Senussi, the former intelligence chief to Muammar Gaddafi, as well as two former prime ministers and 34 senior officials of the old regime.

Security concerns have caused the trial to be moved to the maximum security Al Hadba prison. Yet, when the trial commences, Saif al-Islam will not be present asĀ the rebel militias responsible for his detention in Zintan province continue to refuse to hand him over. He will be tried instead by video link.

Both Saif al-Islam Gaddafi and Abdullah al-Senussi are the subject of proceedings before the International Criminal Court. In May 2013, judges ruled that Saif al-Islam should be surrendered to The Hague but in October 2013, found that Libya is fit to try al-Senussi for themselves. The latter decision is being appealed by defence counsel for Mr al-Senussi.