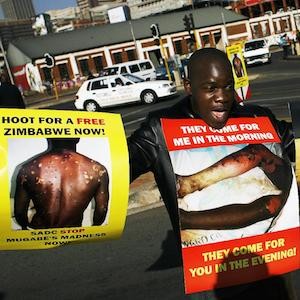 On 30 October 2014, the Constitutional Court of South Africa handed down its judgment in a landmark case for international criminal justice.

The appeal related to the responsibilities of the South African Police Service (SAPS) under domestic and international law to investigate acts of torture, as a crime against humanity, that were allegedly committed in Zimbabwe.

The decision, by South Africa’s highest court, reaffirms the obligations set out in the South African Implementation of the Rome Statute of the International Criminal Court Act 27 of 2002 (ICC Act) regarding investigation and prosecution of international crimes.

In March 2008, the Southern African Litigation Centre (SALC) submitted a dossier to the Priority Crimes Litigation Unit of the National Prosecuting Authority (NPA) detailing allegations of torture in Zimbabwe. The NPA took no action, indicating that they could only do so if the police investigated the allegations and laid charges.

The NPA, in June 2009 – through the acting national director of public prosecutions ­­at the time – informed SALC that the police would not investigate the allegations. SALC and the Zimbabwe Exiles Forum then approached the High Court to order the police to investigate as required under the ICC Act.

The High Court – in what has become known as the Zimbabwe torture docket matter – ordered the prosecuting and investigating authorities to investigate documented crimes against humanity, including acts of systematic torture, committed in Zimbabwe in 2007. The SAPS unsuccessfully appealed that order to the Supreme Court of Appeal, and then again to the Constitutional Court.

In this instance, the court found that there was no evidence that Zimbabwean authorities were willing or able to pursue an investigation. It also found that it would be reasonable and practicable for the SAPS to investigate the complaint given the proximity between South Africa and Zimbabwe, the likelihood that the accused will be present in South Africa at some point, and the reasonable possibility that the SAPS will be able to gather evidence that may satisfy the elements of the crime of torture.

Furthermore, the court held that while the principle of non-intervention in another state’s territory must be observed, this would not be violated by an investigation conducted exclusively within South Africa. Given the urgency of this matter, the court did not remit to the High Court, but rather issued an order requiring the SAPS to investigate the complaint.

The first is that the South African authorities would not themselves have initiated the case in accordance with their statutory and treaty obligations: it has taken the work of civil society for it to be brought to the relevant authorities. (This may have as much to do with a lack of capacity in the respective police and prosecution agencies, as with a lack of political will or priority given to international criminal justice by the executive.) The Zimbabwe torture docket matter demonstrates the willingness and ability of African civil society actors to use domestic implementing legislation to request and, if necessary, compel their governments to act in conformity with their international treaty obligations.

Second, having the necessary domestic laws in place is central to ICC complementarity efforts, domestic prosecutions and broader justice processes aimed at closing the impunity gap. It is only because of South Africa’s ICC Act that the case stood a chance of being brought to the relevant courts, and it remains the means by which the South African authorities must now pursue the investigation of Zimbabwean torturers.

The third lesson is that such cases are complex in various ways. The torture docket matter teaches that it takes time and effort to sensitise officials about the relevance of these cases before positive action is taken. Moreover, particularly where universal jurisdiction is involved in asserting a case against a foreign national for crimes committed abroad, sensitivities about foreign relations are likely to be triggered. The fact is, international criminal justice cases are invariably novel and complex, often implicate political considerations, and take time.

What remains to be seen is whether the SAPS will indeed follow through with an investigation; whether evidence will be gathered speedily and expertly; and whether arrest warrants will be issued for and executed against alleged perpetrators. It is hoped that positive action will make up for the lost time already occasioned by the state’s varied but unsuccessful efforts to appeal the High Court’s decision.

Only such positive action will ensure that the Constitutional Court’s groundbreaking judgment is given the practical effect it deserves; and only through effective policing and prosecution will South Africa ensure that the impunity gap for crimes committed in Zimbabwe is filled.

- This article was originally published on www.issafrica.org