John Kerry delivering his statement on IS on 17 March 2016

United States Secretary of State John Kerry today officially determined the Islamic State group (IS) is committing genocide and crimes against humanity against Christians, Yazidis and Shiite groups in Iraq and Syria. His statement meets a congressional deadline for a decision that was long expected. Though the declaration is not related to any obligation of the United States (US) to take further action against IS or to any prosecution against members of this group.

On 14 March, the US House of Representatives passed by 393 to 0 a non-binding resolution that declared that “the atrocities perpetrated by ISIL against Christians, Yezidis, and other religious and ethnic minorities in Iraq and Syria constitute war crimes, crimes against humanity, and genocide.” END_OF_DOCUMENT_TOKEN_TO_BE_REPLACED 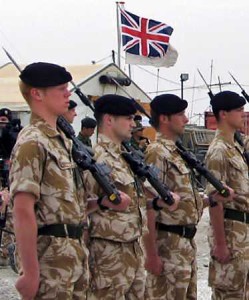 UK Officials have decided to drop investigations into almost 60 claims of unlawful killings by UK soldiers who served in Iraq.

The Iraq Historic Allegations Team (IHAT), set up in 2010 to examine claims of murder, abuse and torture during the Iraq war, has decided not to proceed in 57 cases, the Ministry of Defence has confirmed. A further case was stopped by the military’s service prosecuting authority.

However, Lt Col Nicholas Mercer, the army’s former chief legal adviser in Iraq, has criticised the crackdown on legal claims against Iraq veterans. He said the claims were not false and raised issues of “very high importance”, including the abuse of detainees in Iraq and Afghanistan.

Mercer pointed out that the government has paid out £20m for 326 cases. “Anyone who has fought the Ministry of Defence knows they don’t pay out for nothing. So there are 326 substantiated claims at a cost of £20m, and almost no criminal proceedings to accompany it. You have to ask why,” he said.

Reports confirmed that on the evening of 22 September 2014, a group of masked armed men who belong to

ISIS opened fire and killed her in a public square in the very heart of Mosul, Iraq. She was kidnapped by ISIS from her home last week after she described as “barbaric” the widespread damage that ISIS inflicted on ancient features of her city.

In reaction to this tragic news, the Gulf Centre for Human Rights has condemned in the strongest terms the execution of Samira Saleh Al-Naimi and urged the UN and relevant international institutions to:

1. Carry out an immediate, impartial and thorough investigation into the execution of Samira Saleh Al-Naimi and other crimes committed by ISIS with a view to publishing the results and bringing those responsible to justice in line with local laws and international standards;

2. Guarantee in all circumstances that all human rights defenders and journalists in Iraq are able to carry out their legitimate human rights activities without fear of reprisals and free from all restrictions including judicial harassment.

Samira Saleh Al-Naimi was a prominent lawyer and human rights defender and famous for her activities that include defending detainees and supporting the disadvantaged families in the city.

Yesterday, the United Nations Human Rights Council (UNHRC) held a special session on Iraq to discuss the ongoing crisis and called for an immediate end to the acts of violence and abuses committed against civilians in Iraq, particularly against children and people from various ethnic and religious communities. “The reports we have received reveal acts of inhumanity on an unimaginable scale,” Flavia Pansieri, the Deputy High Commissioner for Human Rights, said in her opening remarks. Members of an ethnic Yezidi family sleep in the shade in Shekhadi village, Iraq, after fleeing Sinjar. Photo: UNHCR/N. Colt

The UNHRC adopted a resolution requesting the Office of the High Commissioner for Human Rights (OHCHR) to urgently dispatch a mission to Iraq to investigate alleged violations and abuses committed by the so-called Islamic State in Iraq and the Levant (ISIL) and associated groups.

The resolution condemns “all violence against persons based on their religious or ethnic affiliation as well as violence against women and children”, including “unlawful killing, deliberate targeting of civilians, forced conversions, targeted persecution of individuals on the basis of their religion or belief (and) acts of violence against members of ethnic and religious minorities”. The resolution calls on the office of the UN new High Commissioner for Human Rights, Prince Ra’ad Zeid al-Hussein of Jordan, to dispatch investigators to Iraq to look into abuses carried out by the group that included the filmed beheading of US journalist James Foley. Investigators will update the UNHRC at its next regular session, which starts next week, and their full report is expected at the council’s annual session scheduled at the beginning of 2015.

Requested by Iraq and backed by Iran, the United States, the Arab Group and the European Union, the special session condemned “in the strongest possible terms” systematic violations and abuses of human rights and violations of international humanitarian law resulting from the terrorist acts committed by ISIL and associated groups “which may amount to war crimes and crimes against humanity…” Reports have gathered evidence on violations of international human rights and humanitarian law, including brutal persecutions of ethnic and religious groups, systematic and intentional attacks on civilians, forced displacement and use of child soldiers. The Prosecutor of the International Criminal Court (ICC), Fatou Bensouda, today reopened the preliminary examination of the situation in Iraq following the submission of a 250-page dossier of new information in January by the European Centre for Constitutional and Human Rights and Public Interest Lawyers. Philip Shiner, human rights solicitor at Public Interest Lawyers, claims that the dossier reveals evidence of more than 400 cases of mistreatment or killings by members of the UK armed forces in Iraq. Former Defence Secretary Geoff Hoon and former Armed Forces Minister Adam Ingram are named in the file.

According to the OTP’s Policy Paper, the purpose of a preliminary examination is to

“collect all relevant information necessary to reach a fully informed determination of whether there is a reasonable basis to proceed with an investigation.”

Under Article 53(1) of the Rome Statute, the Prosecutor will examine issues of jurisdiction (temporal, material, and either territorial or personal jurisdiction); admissibility (complementarity and gravity); and the interests of justice in order to determine whether there is a reasonable basis to proceed.

Andrew Cayley QC, director of the Service Prosecuting Authority (SPA), has indicated that the ICC may run into issues of admissibility. The ICC’s regime is complementary to that of domestic systems; it may only intervene where a State is unable or unwilling genuinely to carry out investigation or prosecution. The Iraq Historic Allegations Team was set up in 2010 “to review and investigate allegations of abuse of Iraqi civilians by UK armed forces personnel in Iraq during the period of 2003 to July 2009.” Where investigations conclude that there is sufficiently credible evidence, cases can be referred to the SPA for prosecution. END_OF_DOCUMENT_TOKEN_TO_BE_REPLACED