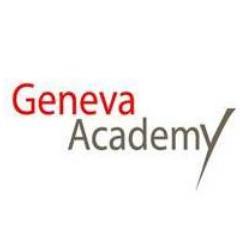 Speaker: Professor Sean D. Murphy - George Washington University; Member of the United Nations International Law Commission where he serves as Special Rapporteur on the topic of ‘Crimes against Humanity’.

The International Law Commission is currently drafting provisions of what could become a Convention on the Prevention and Punishment of Crimes against Humanity.

This event will explore the key elements to be covered by such treaty, its necessity and what such a convention could bring to the fight against impunity.

Tomorrow, the Arms Trade Treaty (ATT) will come into force, thereby becoming binding international law for all countries that ratified it. The ATT is the first legally binding international treaty that controls the global trade of conventional arms by prohibiting the transfer of weapons that may be used to commit atrocities and other serious human rights violations.

UN High Commissioner for Human Rights Zeid Ra’ad Al Hussein hailed the imminent entry into force of the UN Arms Trade Treaty as a “landmark step in curbing the human rights violations that stem from the poorly regulated international trade in conventional weapons.“ “The unregulated arms trade is one of the main drivers of armed conflict and violence, contributing and facilitating the commission of human rights and humanitarian law violations.”

The ATT contains robust provisions preventing the transfer of conventional arms, ammunitions and parts and components to other countries when it is known that these arms or items would be used in the commission of genocide, crimes against humanity, war crimes or serious violations of international human rights law.

In addition, states are obliged to assess if there is an overriding risk that a proposed arms export to another country will be used for or contribute to serious violations of international law, in which case they are prohibited from selling these arms. END_OF_DOCUMENT_TOKEN_TO_BE_REPLACED