On June 25, 2015, the Prosecutor of the International Criminal Court (ICC), Ms. Fatou Bensouda, met with the Palestinian foreign minister, Riad al-Malki, on the cases Palestine wishes to refer under the Rome Statute. 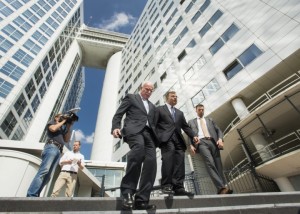 Palestine, which joined the ICC on April 1, 2015, delivered files to the ICC Prosecutor on two sets of facts that would allegedly amount to war crimes committed by Israel.  The first set would inform allegations of civilian killings and wrongful treatment of prisoners throughout the occupied territories, and more especially 2014 military operations Brother’s Keeper and Protective Edge. The second set of information cover Israel’s illegal settlements in the West Bank and East Jerusalem. The question of whether illegal settlements can amount to war crimes has not yet come before the ICC, but Ms. Bensouda said “The settlements will definitely be part of this examination phase.” While the information delivered by Palestine is not considered criminal evidence, they will inform the Prosecutor’s examination of the situation that began in January 2015 and her decision to possibly open a criminal investigation.