While the report ackowledges that possible military targets were identified in some of the bombed areas, it argues that the devastation to civilian lives and property caused in all cases was clearly disproportionate to the military advantages gained by launching the attacks. Attacks where no military targets could have been clearly identified constitute a war crime. When evidence of possible military targets can be proven, under international law, the report states that they should have been cancelled or postponed as soon as it was evident that so many civilians were present in the house. END_OF_DOCUMENT_TOKEN_TO_BE_REPLACED

In a report published yesterday and following a year-long investigation, Human Rights Watch (HRW) asserts that the systematic and widespread killing of at least 1,150 demonstrators by Egyptian security forces in July and August 2013 probably amounts to crimes against humanity. In the August 14 dispersal of the Rab’a al-Adawiya sit-in alone, security forces, following a plan that envisioned several thousand deaths, killed a minimum of 817 people and more likely at least 1,000.

The report, entitled, “All According to Plan: The Rab’a Massacre and Mass Killings of Protesters in Egypt,” documents the death on 14 August 2013 of hundreds of protesters calling for former President Mohamed Morsi to come back. Describing a “mass killing” that could amount to a crime against humanity, HRW calls for an investigation several officials, including Abdel Fattah Al-Sissi, who was elected President in May 2014. “In Rab’a Square, Egyptian security forces carried out one of the world’s largest killings of demonstrators in a single day in recent history,” said Kenneth Roth, executive director of Human Rights Watch. “This wasn’t merely a case of excessive force or poor training. It was a violent crackdown planned at the highest levels of the Egyptian government. Many of the same officials are still in power in Egypt, and have a lot to answer for.”

Kenneth Roth arrived at Cairo airport on Monday to present the report along with Sarah Leah Whiston, executive director of HRW Middle East and North Africa Division. Both were banned from entering Egypt for “security reasons.” 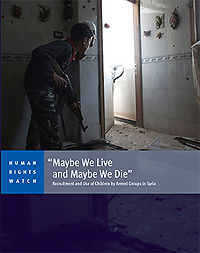 Yesterday, Priyanka Motaparthy, a researcher in the Children’s Rights Division of Human Rights Watch (HRW), published a report documenting on the recruitment and use of children by armed groups in Syria. The 31-page report entitled “Maybe We Live and Maybe We Die” recounts the experiences of 25 children and former child soldiers in Syria’s armed conflict. Priyanka Motaparthy interviewed children who fought with the Free Syrian Army, the Islamic Front coalition, and the extremist groups ISIS and Jabaht al-Nusra, an Al-Qaeda affiliate, as well as the military and police forces in Kurdish-controlled areas.

The investigation reveals that non-state armed groups in Syria have used children as young as 15 to fight in battles, sometimes recruiting them under the guise of offering education, and as young as 14 in support roles. Extremist Islamist groups including the Islamic State of Iraq and Sham (ISIS) have specifically recruited children through free schooling campaigns that include weapons training, and have given them dangerous tasks, including suicide bombing missions.

“Conscripting or enlisting children under the age of fifteen years into the national armed forces or using them to participate actively in hostilities” is a war crime under the Rome Statute of the International Criminal Court (ICC) and the Optional Protocol to the Convention on the Rights of the Child, ratified by Syria in 2003,  bans government forces and non-state armed groups from recruiting and using children, defined as anyone under 18, as fighters and in other support roles. END_OF_DOCUMENT_TOKEN_TO_BE_REPLACED