One of the greatest challenges arising in the context of a cyber attack is the application of the principle of distinction. The principle of distinction is a cornerstone of IHL, one which requires that parties to a conflict differentiate between civilians/civilian objects, and combatants/military objectives at all times (the latter being legitimate targets in an armed attack, while the former cannot be attacked under any circumstances). Making such a distinction in cyberspace is however wrought with difficulty, due to characteristics of the forum, such as its interconnectivity. Cyberspace is a complex network of countless, interconnected computer systems, spanning across the globe. Civilian and military computer systems therefore may be, and often are, intertwined (with the latter sometimes even relying on the former). As a result, it is incredibly difficult to identify ‘legitimate’ targets, and to limit the effects of an attack to a pure military objective. END_OF_DOCUMENT_TOKEN_TO_BE_REPLACED

Marko Milanović - Associate Professor at the University of Nottingham and Visiting Professor at the Geneva Academy - will explore the key legal issues and challenges arising from the recent attacks carried out around the world by the Islamic State’s followers. In particular, Professor Milanović will address:

Antonio Coco and Patryk Labuda will serve as discussants, after which the floor will be opened up to comments and questions.

If you plan to attend, please register here. The Netherlands Red Cross and Belgian Red Cross-Flanders invite you to attend the Finals of the Frits Kalshoven Competition on International Humanitarian Law 2015 on Friday afternoon 27 February 2015.

The Competition, which will take place for the 8th year, has as its objective to engage ambitious Law students in the implementation of the rules that apply during armed conflict. The theme of this year’s competition is “Warfare in densely populated areas”, a subject that has been in the news often recently.

The focus will be on realistic dilemmas surrounding use of explosive weapons and the protection of civilians.

After an intense week full of workshops, lectures, role plays and pleadings about international humanitarian law, two teams will compete in the grand finale of the Moot Court in front of a bench of reknown experts:

The prize for Best Oralist will be awarded by Pieter de Jong Schouwenburg (Van Doorne Advocaten).

You can register online until 20 February. 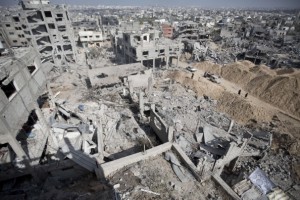 While the report ackowledges that possible military targets were identified in some of the bombed areas, it argues that the devastation to civilian lives and property caused in all cases was clearly disproportionate to the military advantages gained by launching the attacks. Attacks where no military targets could have been clearly identified constitute a war crime. When evidence of possible military targets can be proven, under international law, the report states that they should have been cancelled or postponed as soon as it was evident that so many civilians were present in the house. END_OF_DOCUMENT_TOKEN_TO_BE_REPLACED Today, the International Committee of the Red Cross (ICRC) has made available on its online, free of charge Customary IHL database an update of State practice of 7 countries and 3 tribunals relating to armed conflicts and humanitarian issues such as the distinction between combatants and civilians, the use of nuclear, biological and chemical weapons, the protection of internally displaced persons, the protection of children and in particular child soldiers, the prohibition of sexual violence and slavery, the integration of international humanitarian law (IHL) into the training and operations of armed forces, and the prosecution of war crimes.

Practice up till the end of 2010 of the following countries has been included for this most recent update of the Database: Armenia, Brazil, Cuba, El Salvador, Georgia, Nepal and New Zealand. Case-law of the Extraordinary Chambers in the Courts of Cambodia, the International Criminal Court and the International Court of Justice dealing with questions of IHL has also been updated. New practice is marked in green throughout the database.

The purpose of the Customary IHL database is to make not only the rules of customary IHL but also the underlying State and international practice easily accessible by everyone interested in the interpretation and application of IHL. The information in the database is easily accessible by means of three search parameters: subject matter, type of practice and country, which can be used separately or can be combined in a powerful search engine.

The database will continue to be updated with practice from about 100 countries and a number of relevant international bodies. The next updates of both national and international practice are scheduled for June and July 2014.