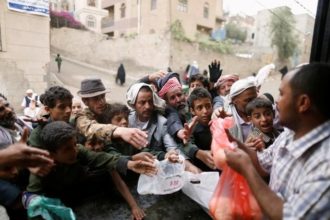 The Arab Organisation for Human Rights in the UK (AOHR UK) invites you to participate in a seminar concerning the ongoing humanitarian crisis in Yemen: More than 8 million people are at risk of famine, with more than 22 million in desperate need of aid and protection. Yemen is likely to be the famine that will define this era.

International lawyers Joseph Breham and Catriona Murdoch of Global Rights Compliance and expert Clive Baldwin senior legal advisor at Human Rights Watch, will be speaking at the seminar in an attempt to draw the world’s attention further to the crisis - described by some as a forgotten war. Those experts will discuss the conflict, the legal and investigative steps, accountability efforts and mechanisms, and the humanitarian aspects to starvation, conflict and food insecurity. The event will be moderated by Rhys Davies an international criminal and human rights law barrister at Temple Gardens in London.

The situation in Yemen continues to worsen and is, the UN says, the world’s worst man-made humanitarian disaster.

According to the UN Human Rights Council, civilians have repeatedly been the victims of “unrelenting violations of international humanitarian law”. About 75% of the population – some 22.2 million people - are in desperate need of humanitarian assistance, including 11.3 million people in acute need who urgently require immediate assistance to survive.

Millions of people are considered at risk of starvation. Severe acute malnutrition is threatening the lives of almost 400,000 children under the age of five.

With only half of the country’s health facilities fully functioning, at least 16.4 million people are lacking basic healthcare. Medical professionals have struggled to cope with the world’s largest cholera outbreak, which has resulted in more than 1 million suspected cases and thousands of associated deaths since April 2017.

It is against this backdrop that the assembled experts will consider what action can be taken, including both legal and humanitarian remedies. Yemen has been described as the “war the world forgot” eclipsed by Syria and complicated by a Saudi-led coalition supported by the United States, the United Kingdomand France. The resulting humanitarian disaster features a famine of cataclysmic proportions. The word “famine” evokes images of dusty pot-bellied children and the wrath of nature. However, the reality is that this is less nature’s cruelty and more mans: “starvation” often more accurately reflects these wholly human-made and preventable catastrophes, where failed diplomacy and ostensible military objectives collide. END_OF_DOCUMENT_TOKEN_TO_BE_REPLACED