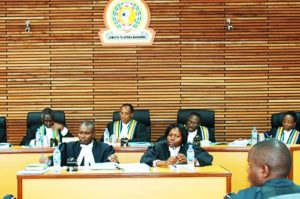 This post exposes a major obstacle facing one of the African regional economic community judiciaries: the East African Court of Justice (EACJ, or the Court). The EACJ is the judicial organ embedded to settle disputes in connection with the East African Community (EAC) integration activities. Comparatively, the EACJ is a replica of other regional economic community courts, currently in existence, such as the Court of Justice of the European Union.

Private litigants play a key role in modelling states’ behaviour to realise their integration ambitions. One of the operational principles of the EAC is the ‘people-centered’ co-operation form of integration (art 7(1)(a) of the EAC Treaty). Therefore, it was not an oversight to permit individuals to account Member States before the EACJ, whenever there is an infringement of the EAC Treaty. However, article 30(2) of the Treaty restricts private litigants to lodge their complaints: within two months of the enactment, publication, directive, decision or action complained of, or in the absence thereof, of the day in which it came to the knowledge of the complainant, as the case may be.

Following a significant level of silence on the stringent rule, this post is vitally important considering the nature of the subject it tackles. Judges have been narrowly and strictly interpreting article 30(2) of the EAC Treaty, preventing private litigants to lodge their complaints to the EACJ with ease. Eventually, individuals are being denied access to justice. This post, therefore, argues that EACJ judges need to broadly and purposely interpret article 30(2) of the EAC Treaty. The grounds used to deny to extend the two months’ time window are contrary to the spirit of the EAC Treaty. Thus, this post provides some legal evidence for EACJ judges to stretch the rigorous time limitation clause. END_OF_DOCUMENT_TOKEN_TO_BE_REPLACED

On Thursday 6 July 2017, Pre-Trial Chamber II of the International Criminal Court (ICC) found that South Africa failed to comply with its obligations under the Rome Statute in the Omar Al-Bashir case. The former President of Sudan had visited South Africa on 13 June 2015 to attend the 25th Assembly of the African Union.  The South African government then took no steps to arrest Omar Al Bashir, claiming he benefited from immunity as a head of State. In March 2016, the Supreme Court of Appeal of South Africa had ruled the government had shown unlawful conduct “in failing to take steps to arrest and detain, for surrender to the International Criminal Court, the President of Sudan, Omar Hassan Ahmad Al Bashir.”

The ICC found that South Africa failed to comply with its obligations by not arresting and surrendering Omar Al-Bashir to the Court while he was on South African territory between 13 and 15 June 2015. The Court considered that immunities did not apply as Sudan was in an analogous situation to those of States Parties to the Statute as a result of the UNSC’s resolution, under Chapter VII of the UN Charter, triggering the Court’s jurisdiction in the situation in Darfur and imposing on Sudan the obligation to cooperate fully with the Court.

However, the Chamber considered that it is not warranted to refer South Africa’s non-compliance to the Assembly of States Parties (ASP) or the Security Council of the United Nations (UNSC). This decision was motivated on the facts that South Africa was the first State Party to seek from the Court a final legal determination on the extent of its obligations to execute a request for arrest and surrender of Omar Al-Bashir and that South Africa’s domestic courts have already found South Africa to be in breach of its obligations under its domestic legal framework.