In the Bemba case, the Appeals Chamber issued in judgments on the  appeals against verdict and sentence. All five accused had appealed against their conviction, and all five appeals were rejected by the Appeals Chamber. Convictions were confirmed, but the charge of presenting evidence that a party knows is false or forged of which Mr Bemba, Mr Kilolo and Mr Mangenda were acquitted on the basis that this provision only applies to the presentation of documentary evidence, not to the calling of witnesses.

END_OF_DOCUMENT_TOKEN_TO_BE_REPLACED SCL Lectures are public and free of charge. Registration is not necessary, seats are available on a first-come-first-served basis.

This Wednesday, Germain Katanga discontinued his appeal against his conviction before the International Criminal Court (ICC). In a letter signed by Katanga and his defence counsel, David Hooper, Katanga stated that he “accept[ed] the conclusions rendered against [him] in the judgement and [he] express[ed] [his] sincere regrets to all who were affected by [his] conduct, including the victims of Bogoro.”

Katanga had been convicted by a majority of Trial Chamber II on 7 March 2014 of one count of crime against humanity (murder) and four counts of war crimes (murder, attacking a civilian population, destruction of property and pillaging)

committed on 24 February 2003 during the attack on the village of Bogoro in the Democratic Republic of the Congo. He was sentenced, again by majority, to 12 years’ imprisonment with credit for the time he has served whilst in detention in The Hague - 7 years to date.

The Prosecutor subsequently informed the Appeals Chamber that she also discontinued her appeal against the judgment and that she does not intend to appeal the sentence imposed on Germain Katanga.

The issue of reparations for victims will be considered next. crimes of murder, attacking a civilian population, destruction of property and pillaging. The majority held that Katanga had contributed to the commission of crimes by the Forces de Résistances Patriotiques en Ituri, an armed group operating in the DRC who carried out an attack against the village of Bogoro on 24 February 2003.

In his summary of the sentencing judgment, Presiding Judge Cotte highlighted the gravity and particular cruelty with which the crimes were committed, resulting in the deaths of numerous civilian victims including women and children. The Chamber considered that the crimes were also clearly committed on a discriminatory basis targeting the mainly ethnic Hema who populated Bogoro village at the time of the attack. END_OF_DOCUMENT_TOKEN_TO_BE_REPLACED This Tuesday, Trial Chamber II of the International Criminal Court (ICC) announced that it will deliver the sentencing judgement in the case of Germain Katanga on 23 May 2014 at 09h30 (Hague time) in open court. Interested parties will be able to view the live webstream here.

Under Article 77 of the Rome Statute, the judges may impose a sentence of imprisonment as well as a fine or forfeiture of proceeds, property, and assets derived from the crimes. Sentences of imprisonment cannot exceed 30 years except when justified by the extreme gravity of the crime and the individual circumstances of the convicted person, in which case a sentence of life imprisonment may be imposed.

Germain Katanga was convicted by a majority of Trial Chamber II on 7 March 2014 of one count of crime against humanity (murder) and four counts of war crimes (murder, attacking a civilian population, destruction of property and pillaging) committed on 24 February 2003 during the attack on the village of Bogoro, in the Ituri district of the DRC. He was convicted as an accessory of contributing to the commission of crimes by members of the Forces de Resistance Patriotiques en Ituri through supplying arms and ammunition. END_OF_DOCUMENT_TOKEN_TO_BE_REPLACED Last week, a Congolese witness detained in the International Criminal Court (ICC)’s detention unit for over three years has decided to go on hunger strike.

Floribert Ndjabu is one of three witnesses who sought asylum in the Netherlands after giving testimony in 2011 in the cases of Mathieu Ngudjolo Chui and Germain Katanga.

Ndjabu, Pierre Celestin Mbodina and Manda Charif were sent from a prison in Democratic Republic of Congo (DRC) where they were being held pending trial for alleged war crimes.

During their testimonies, they implicated Joseph Kabila as having a hand in the massacres for which Ngudjolo and Katanga were accused.

Fearing prosecution after their testimonies if they were sent back to the DRC, they sought asylum in the Netherlands.

However, three years later, their case is still pending before the Dutch Supreme Court, which is to begin hearings on June 6.

“Floribert is desperate because he’s been held at the detention unit for three years as an asylum seeker and the Netherlands refuses to take him […] He’s afraid that the process will go on much longer and that he’ll be in detention for many more years” said Ndjabu’s lawyer.

He added that one of the other witnesses was also thinking of going on hunger strike.

In January, the ICC’s Appeals Chamber ordered the three men to be sent home, pressing the Dutch authorities for a decision on their asylum bid. 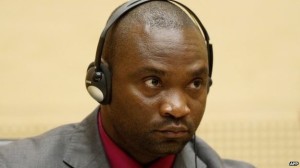