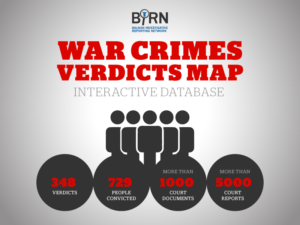 This War Crimes Verdicts Map is an interactive tool intended to provide an overview of court rulings on the crimes that were committed during the wars in the former Yugoslavia in the 1990s.

“While reporting on war crimes, we as journalists often struggled to get all the documents related to the war crimes cases we have been following. Through the years, we accumulated a significant archive and then also collected verdicts from the various courts,” said the map project’s team leader, Marija Ristic.

“Bearing in mind how closed to the public our courts still are, we believe this map will be a unique resource for journalists, students, researchers and the general public,” she added.

According to the map data, so far at least 646 people have been convicted by local courts and 83 more by the ICTY for crimes committed during almost a decade of conflict in the former Yugoslavia which left some 125,000 people dead and 12,000 still missing.

Besides the verdicts, the ‘Resources’ section includes indictments and other case records.

The map will be periodically updated.