In the first phase of the proceedings on admissibility, the United Kingdom, India and Pakistan raised several objections to the jurisdiction of the Court and the admissibility of the application. END_OF_DOCUMENT_TOKEN_TO_BE_REPLACED See the invitation attached. To register, please send an email by 12 January. 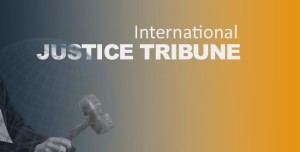 After almost a two-year break, the International Justice Tribune is back.

The International Justice Tribune is also finalizing a new website which will be launched soon.